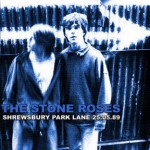 Sound Quality: B
Clear and steady, but distorts during particularly loud sections. Sound check is in marginally better quality than the gig.

Performance Quality: A
Very melodic performance. Squire’s jangling guitar with Ian and Reni’s great vocals. This is one of Ian’s best ever live performances – not even a glitch on the chorus of Resurrection.

The best ever live performance of Made Of Stone is on here, and great performances of Where Angels Play and Standing Here are too. Also funny to hear Ian shout to someone in the audience “Sit down man – you’re making a spectacle of yourself” and hear the audience all laugh at him. This causes a fight, which Ian tries to calm down during the opening to Adored!

“I was absolutely blown away. Mani makes a couple of mistakes and the quality of the recording isn’t the best, but Ian steals the show. I have never heard him sing so perfect, and it restored my faith in him as a singer. An amazing performance all round, Made Of Stone is the best thing I have ever heard live.” – Paul Youngson, Scotland

“Proof to my mates that Ian Brown can sing (in tune) when he wants to” – David Reed, England

“I was totally floored by this concert. Probably the greatest gig I’ve ever heard, even though crap sound quality. Ian sounded like Pavarotti.” – RT, Taiwan

“Quite an edge atmosphere early on but the music is soaring.” – Robin Kennedy, Scotland