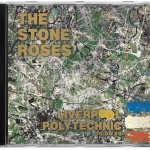 Sound Quality: C
Distorts at high volumes, but it’s not that bad, with quite clear instruments. Vocals aren’t too clear though.

Performance Quality: B
Another good set from this period, but contains a few mistakes by Reni on Waterfall and Where Angels Play is messed up a bit.

A witness to this gig said, “You could tell that there was something going on. The crowd were well into it. There was a definite atmosphere.” The gig packed out the Polytechnic, which was not used to such big crowds.

One thought on “Liverpool Polytechnic ’89”