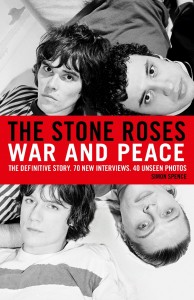 Author and journalist, Simon Spence promotes the release of his newÂ book, The Stone Roses: War and Peace

Simon, who reviewed 1990’s Spike Island for Face magazine, will be at the store from 1.00 pm to meet fansÂ and sign copies of the new book which is published through Penguin.

The Stone Roses: War and Peace

Â is based on 400 hours of interviews with over seventy of The Stone Roses’Â closest associates, including six former band members.

The book traces the band’s genesis, studded with violent gigs andÂ abandoned recordings, and shaped by their infamous manager GarethÂ Evans. TheÂ Roses’ legendary gigs culminated in the era-defining Spike Island showÂ in 1990, yet from this pinnacle the unravelling was spectacular.

With theÂ band refusing to play in America, arrested for vandalizing a recordÂ company and dragged through the High Court, the epic recording ofÂ their dark second album is the stuff of legend.

They disbanded inÂ turmoil in 1996.

The Stone Roses returned to the stage last night in Sweden as they played the Hultsfredsfestivalen. Unusually the band opened their performance with Love Spreads and went on to play a full 14 song set. The Stone Roses setlist at Hultsfredsfestivalen 2012

John Squire has responded to recent reunionÂ  rumours with an outright denial.
His spokesman said he was not involved in reunion and claimed all recent reportsÂ  were “unfounded from John Squire’s perspective”.

A spokesperson for Ian Brown said today, ‘We know nothing about a reunion. Ian is working on his new studio album which is due out later this year.’